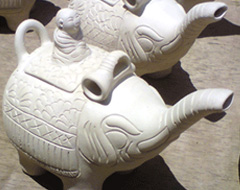 Potters were excluded in the past from traditional Balinese village, as they were consider unclean. Therefore they stayed together and live in special village, such as Pejaten, in Tabanan district. These people were poor, they owned only the land that they live on and had no rice field. Every family had its own small pottery. The pots were made by hand, on a slow hand- wheel. They were fired on an open fire, covered by rice straw. The product, mostly cooking and stored vessel, but also ceremonial ware for their temples, were carried to nearby markets to be sold. With the introduction of plastic and aluminum the demand for ceramic pot decline rapidly.

In the 1970-s, after a period of deep proverty, Pejaten entered a new ceramic era. Under guidance of Mr. Tanteri, the village head, they started to produce ceramic roof tiles. Within a few years this become a flourishing industry. While at the first the tile were all made by hand individually, soon a tile press was introduce, as well as a clay- mill. These two inventions greatly improved  the quality of the tile. Growing tourism and construction activity for hotels on Bali, increase the demand of roof tiles. Every one in Pejaten become involved in the roof tile industry, recruiting even workers from other island, such as Lombok and Java.

After ten flourishing years, however, the clay in Pejaten itself was running out, and Mr. Tanteri start looking for new impulses for the ceramic industry in the village. That was how the dutch artist and consultant Hester Tjebbes was introduce to the clay village of Pejaten. Together  with Mr. Tanteri developed a new ideas, and soon afterwards, in 1985 she depeloped a ceramic art project for with the Ducth foundation HIVOS be come the donor.

This project was based on the idea that the industry could be redirected to more artistic product of better quality through new techniques, aimed at growing tourist industry. Clay was to be imported from others Indonesia islands. Hester taught a selected group of villagers to use a potter’s wheel, she tough them a new designs, mostly based on traditional balinese art, and she build for them a new kind of  closed kiln with a chimney and so call downdraft to obtain a better quality through higher temperature at lower fuel-cost.

Today an estimated 500 potters make a living with this new kind of ceramics for the tourist and export. 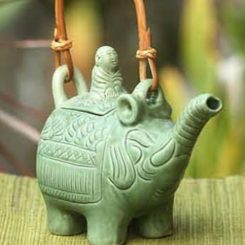 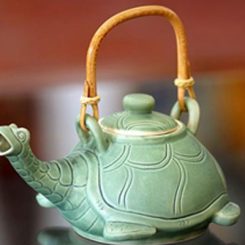 They are beautiful and well made (Sena,Texas)

I purchased a pair of vases as a gift for my sister. She absolutely loves them! They are beautiful and… 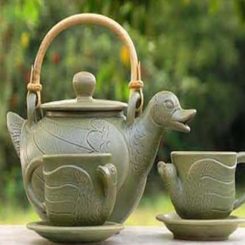 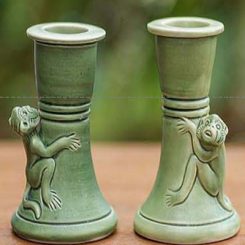